“First and foremost, Precision Rifle & Tool’s customer service is unmatched. Their machine work is held to the tightest tolerances. Combine that with the best engineered stocks on the market and you have the finest long range rifles available; backed by the best warranty in the industry. You too will be 100% satisfied.” –Charles Ballard 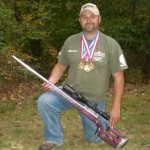 Charles Ballard’s Accomplishments with Our Rifles